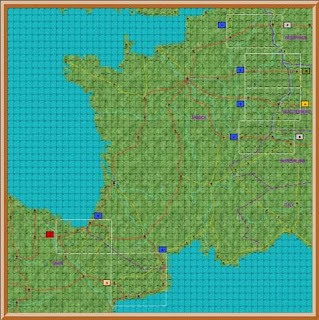 This was a fictional campaign set in 1814

The objective was to produce interesting battles for us to wargame.
It was designed to use all of our model soldiers and scenery on our 6x6 foot wargames table.

The campaign was designed in six areas, each with one allied and one French army

Each area would have six objectives, each of which would be fought as a mini campaign, or phase of the overall campaign.   Each of these phases would be self contained.  They would start with each army at full strength and fully supplied.    This would provide a suitable stage to replace players and avoid long drawn out campaigns.

We did not achieve the campaign objective of one campaign day each week.  The campaign lasted approximately 88 weeks, and we managed to complete 54 campaign days.

Each campaign day we processed twelve sets of orders and moved 48 corps around the campaign map.   That is a total of 2,592 corps moves.

The campaign provided us with 95 battles to wargame   Throughout the 22 months there was always a campaign battle set up on our wargames table.   Each battle took us about a week to wargame.

The labels on the left enable you to read each phase of each campaign.   The battle reports form part of the campaign phase history.   For example label 31 covers the Austrian campaign for Strasbourg.

I closed the campaign in order to incorporate all the lessons I had learnt into the next campaign.   It is difficult to do so within an ongoing campaign, players do not like the rules changed mid campaign.

The campaign was a complete success, and both enjoyable and satisfying to run

Posted by Paul Leniston at 1:56 PM

Email ThisBlogThis!Share to TwitterShare to FacebookShare to Pinterest
Labels: 76 Summary of 1814 Campaign